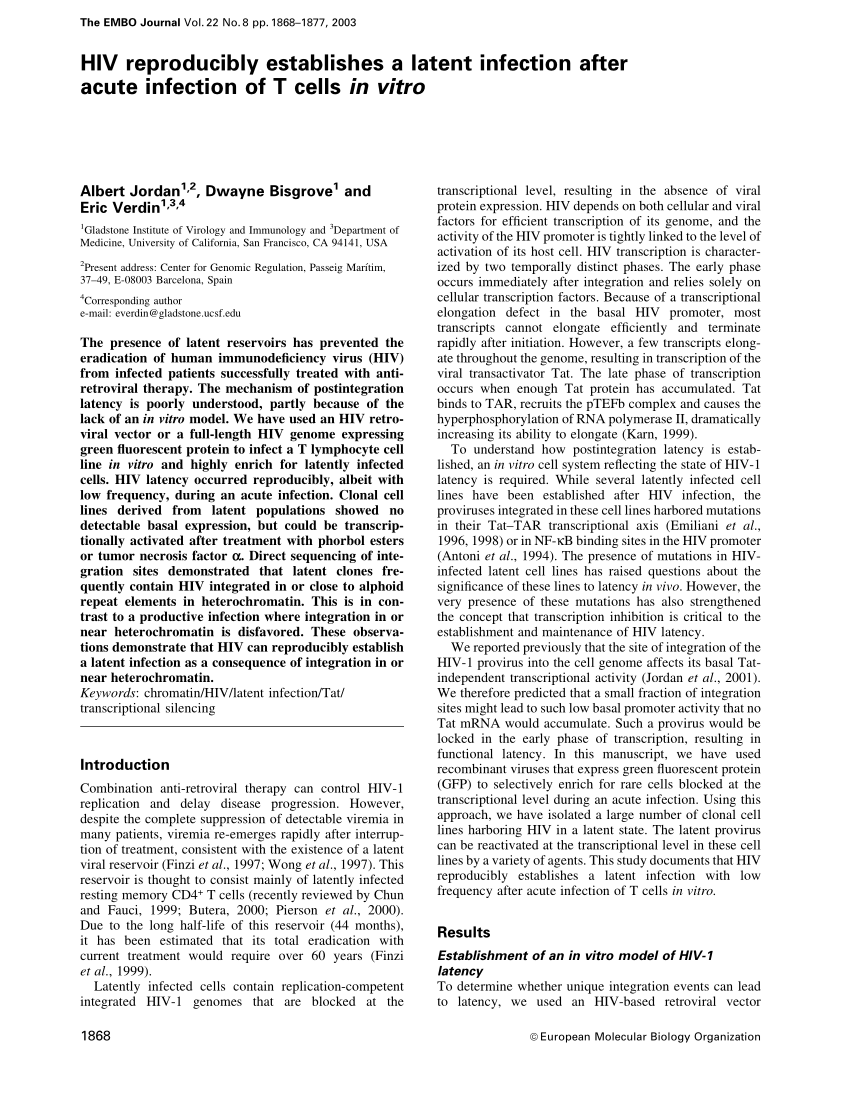 Drug-resistance mutations generated by previous nonsuppressive regimens persisted in this compartment despite more than 1 year of fully suppressive HAART, rendering untenable the idea of recycling drugs that were part of failed regimens.

The success of combination therapy for the treatment of HIV-1 infection has resulted in a focus on sources of persistent HIV-1 in treated individuals. HIV-1 exists in different forms in several compartments with different rates of turnover.

The preintegration form of HIV-1 latency is relatively unstable, with an estimated half-life as incection as 6 days J. These cells would carry an integrated copy of the HIV-1 genome that is not fully expressed in cells in a resting state.

Studies of the kinetics of the free virus turnover in the plasma of HIV-1—infected adults and children who are treated with highly active antiretroviral therapy HAART have shown similar decay patterns. A second, slower phase decay in plasma HIV-1 RNA becomes apparent several weeks after the initiation of HAART and most likely reflects the turnover of compartments with longer half-lives, such as infected macrophages 10 Whereas combinations of antiretroviral agents are effective at suppressing viral replication to below latemt detection limits of standard plasma HIV-1 RNA assays and PBMC culture assays, ffinzi are ineffective at eliminating latent forms of HIV A priorithere are several reasons to believe that the dynamics of the latent reservoir might be different in children with perinatally acquired HIV-1 infection than in adults.

Virus culture data were analyzed by inffction maximum likelihood method In cases where all determinations were negative, an upper bound on the infected cell frequency was estimated by making the conservative assumption that the next highest cell concentration would be positive. The positions of the primers are numbered according to the pol gene of the HXB2R isolate http: Sequence validation was carried out by recommended methods Sequencing was performed on viral isolates that represent distinct biological clones obtained with a limiting dilution culture technique.

Basic local alignment search tool BLAST searches of the Genbank revealed that none of the sequences matched laboratory or patient isolates published previously.

Phylogenic analysis by standard methods 29 — 31 revealed the expected clustering of sequences of distinct biological clones obtained from individual patients. Observed resistance mutations were consistent with treatment history of individual patients. The median age at entry was 7.

Two children had received no antiretroviral therapy at entry. Six children were receiving combination therapy with 2 nucleoside analogues and the protease inhibitor ritonavir. A subset of 9 children in the initial cohort achieved durable suppression of viral replication on HAART and were followed longitudinally to determine whether there was time-dependent decay in the latent reservoir. Included in this group were 6 children patients 7, 10, 11, 14, 15, and 21 who were started on HAART and followed longitudinally.

Three additional children patients 2, 8, and 12who at entry had been receiving HAART for 4, 16, and 8 months, respectively, and who had sustained suppression of viral replication to undetectable levels, were also followed longitudinally infwction 17—21 months.

These results therefore establish the existence of this cellular reservoir in indection. The culture assay used to detect latent HIV-1 can detect cells in the preintegration state of latency and cells in the more stable postintegration state of latency. However, as shown below, the frequency of latently infected cells remains above 0. In these 4 children, within 1 to 8 months of therapy with HAART it became difficult to culture HIV-1 at 1 or more time points using the standard input of 2.

Patient 2 started zidovudine, lamivudine, and ritonavir at 11 months of age after having received 6 weeks of zidovudine therapy for postnatal prophylaxis. At 15 months of age, the frequency of cells carrying replication-competent HIV-1 was 1. Thus, there was no decay in this reservoir despite prolonged suppression of viral replication. Patient 8 was started on combination therapy with ritonavir 19 months before the first analysis.

There was a problem providing the content you requested

These results demonstrate persistence of latent HIV-1 near the limit of detection, with possible slow decay. Possibilities include the persistence of cells in an inactive state for long periods of time or gradual renewal of the latent pool by low levels of ongoing viral replication 35 — In the former case, the composition of the latent reservoir should not change on therapy and should reflect the infectiin status before HAART.

If the reservoir is maintained by ongoing viral replication, then the possible emergence of drug-resistant virus is a serious concern. We therefore analyzed viruses isolated from latently infected cells for the persistence or emergence of known drug-resistant mutations in the HIV-1 pol gene. Isolates from the 7 children who had suppression of viral replication for 1 year or more were sequenced.

None of the 7 children developed primary antiretroviral resistance substitutions at the amino acid positions 30, 54, 82, 88, or 90 that are reported to confer phenotypic resistance to the protease inhibitors used nelfinavir or ritonavir. In contrast, 5 of the 6 children who were treated previously with incompletely suppressive regimens of zidovudine and didanosine and who had suppression of viral replication for 12—30 months on HAART had persistence of replication-competent HIV-1 harboring mutations conferring resistance to zidovudine and didanosine.

Because the MI mutation is associated with drug resistance to both didanosine and lamivudine and both children received previous nonsuppressive therapy with didanosine, then were subsequently treated with a suppressive regimen that contained lamivudine, it is not possible to determine to which drug this mutation should be attributed. Interestingly, patient 12, who was treated previously with zidovudine and didanosine and subsequently received suppressive therapy with stavudine and ritonavir for 30 months, has had intermittent levels of plasma HIV-1 RNA between 30 to 50 copies over a 2-year period.

In this child, none of the 4 HIV-1 isolates cultured after 30 months of suppressive therapy with ritonavir and stavudine had genotypic substitutions in the protease gene that confer resistance to ritonavir. However 2 of the 4 isolates contained amino acid insertions at position 69 [69 Ser- Ser-Val ] reported to occur with treatment with zidovudine in combination with didanosine or zalcitabine and associated with high-level resistance to the nucleoside RT inhibitors 2939 — Dashes represent amino acids that are unchanged from the reference sequence HXB2R. 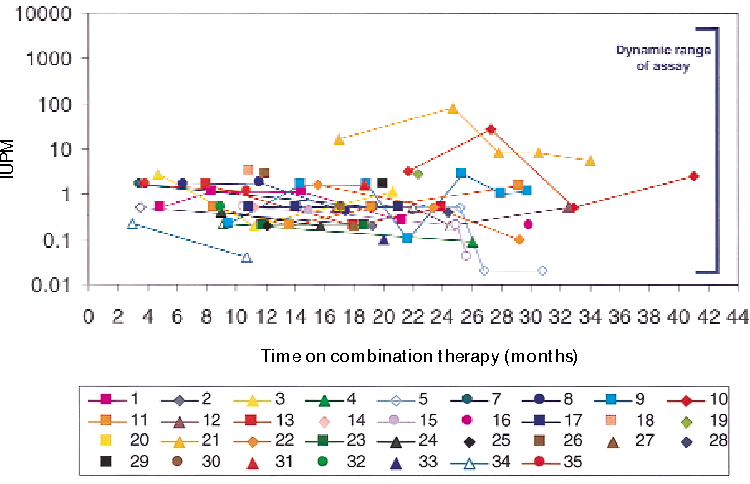 Positions in protease at which polymorphisms occur are shown in black type. Known polymorphisms that are also seen as accessory substitutions fimzi to resistance to ritonavir RTV or nelfinavir NFV are shown in colored type. A particularly dramatic illustration of the stability of the latent reservoir is provided by the case of the child who has had the longest duration 37 months of suppression of lnfection replication with HAART patient 8.

This child was treated with nonsuppressive antiretroviral regimens consisting of zidovudine, lamivudine, didanosine, and zalcitabine for 3.

This reservoir has a biphasic decay pattern after the initiation of HAART, with a rapid initial drop in the first 3 months of therapy followed by a second phase in which there is minimal decay. The fact that in most children on HAART who have undetectable plasma virus the frequency of latently infected cells is in the range of 0.

This is confirmed by our longitudinal studies, which demonstrate very little decay in this stable latent reservoir after the first 3 months of therapy, during which time the preintegration form of latency is undergoing decay.

In comparing the latent reservoir for HIV-1 in children and adults, the following conclusions can be drawn. First, the fraction of latently infected cells is similar.

Thus although children are establishing a pool of memory cells, the fraction of these cells that carry replication-competent HIV-1 does not appear to be significantly higher than in adults. After the rapid initial decay in the first 3 months of treatment, little subsequent decay is detected. The precise mechanisms involved in the generation of this latent reservoir are unknown; the occasional reversion of HIV-1—infected, activated T lymphocytes to a resting memory state with integrated HIV-1 is one plausible mechanism.

Analysis of the viral isolates cultured from this compartment in a group of children who were pretreated with nonsuppressive antiretroviral regimens showed the persistence, for up to 2 years, of drug-resistant substitutions selected by previous nonsuppressive antiretroviral therapies. Additional longitudinal studies are needed to determine the kinetics and evolution of latent HIV-1 in this cellular reservoir in children treated for longer periods and to determine the timing and impact of early treatment with HAART on the development of this cellular reservoir in children with perinatally acquired HIV-1 infection.

However, the data presented here indicate that the latent reservoir for HIV-1 is established in infected children and will likely represent a major barrier to virus eradication that will have to be considered in all therapeutic strategies for the treatment of pediatric HIV-1 infection.

Introduction The success of combination therapy for the treatment of HIV-1 infection has resulted in a focus on sources of persistent HIV-1 in treated individuals. Culture assay for latently infected cells. Mathematical and statistical methods. Sequencing of the HIV-1 pol gene. Table 1 Patient characteristics at entry. Open in a separate window. Analysis of drug-resistance mutations in viral isolates from latent reservoir.